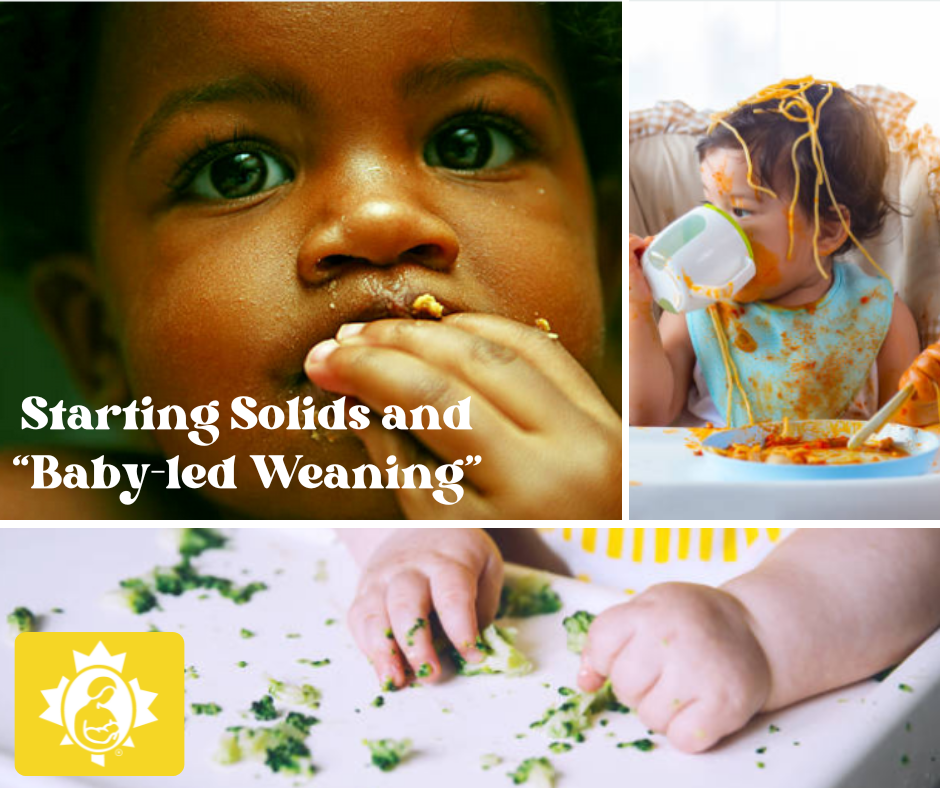 Are you excited to get your baby eating “real food?” Or are you dreading the messiness of this next stage? Either way, starting solid foods is often a milestone in your baby’s life.

The approach to starting solids has changed over the years; knowing more about those changes might help you understand why your parents or grandparents might have different experiences and advice about this. For thousands of years, parents just began sharing their family foods with their babies when they showed interest. Breastfeeding provided complete nutrition for babies until they were ready for solids, and it was a gradual process generally led by the baby.

The history of spoon feeding and baby foods
By the 1800s, some parents who needed to supplement breastfeeding or completely replace it were making substitute milks for their babies. Doctors began to write up “formulas” or recipes for their patients to follow, giving the amounts of cow’s milk, sugar, etc., to mix together and prepare for the baby. Commercial formulas followed in the 1860s and gradually became more popular.

Those early formulas, though, could be problematic. In the early 1930s, three Canadian pediatricians and a nutritionist became concerned about the many cases of malnutrition they were seeing in young babies. They created “Pablum” – the first processed cereal for babies – to help provide better nutrition for those babies.

Pablum was so successful that many other companies created their own processed baby cereals. Doctors began to recommend the cereals for younger and younger babies. Of course, especially with young babies, the only way to feed these cereals was for a caregiver to spoon it into the baby’s mouth. (Some did mix the cereal into baby bottles as well.) By the 1970s, some doctors were recommending starting solids for babies as young as a week old, although six weeks was more common.

And even though these cereals were developed to solve a problem experienced by formula-fed babies, most doctors made the same recommendations for breastfed babies.

As breastfeeding became more popular, the age for starting solids has gradually shifted to six months. La Leche League has always suggested starting solids “around the middle of the first year.” But grocery store shelves are still filled with processed cereals and pureed foods – foods designed to be spooned into the baby’s mouth.

Research suggests that this may not be the best approach.

Why does it matter how and when solids are introduced?
Studies have found that babies who start solid foods earlier and babies who are spoon-fed pureed foods are more likely to overeat as toddlers. This can set a lifelong pattern of overeating. (This also applies to babies who were given either human milk or formula by bottle.) As well, starting with sweet foods (such as fruits and some processed cereals) is linked to babies being less interested in eating vegetables and other not-sweet foods later on.

The “Baby-led” approach to starting solids
It seems that the best way to raise children who have a healthy relationship with food and who can self-regulate is to let the baby set the pace from the start. That happens quite naturally with breastfeeding. A similar approach with starting solids is sometimes called “Baby-led Weaning.” It simply means that babies are allowed to feed themselves; the babies decide which foods to take (from what is offered) and how much to eat.

To make this work, you watch for signs that your baby is interested in eating solid foods. This usually happens around the middle of the first year, but can be a bit earlier or later. Babies will often reach for food if they are sitting on someone’s lap at mealtimes, or will watch intensely as others are eating. That can be your cue to offer your baby some food and see what happens. Your baby might just play with it or smush it onto the highchair tray, but some might get in their mouth. There’s no rush.

While you want to give your baby the kinds of foods your family eats, you also want to be sure they are prepared to be safe and healthy. Fried foods, foods with added sugar and salt, and processed meats, for example, should probably be avoided at this stage. You also need to make sure the foods are not likely to cause choking. You can cut foods like grapes into smaller pieces, grate carrots and apples, and cook vegetables such as sweet potatoes and beets so that they are soft enough for your baby to handle.

Usually, parents will opt to offer one food at a time at first. The reason: if your baby has some kind of reaction to the food (such as an allergy), you’ll know what food it is. If allergies are rare in your family, you may not need to be as cautious. Over time you will be able to add more foods and offer several choices at each meal.

The goal is to let babies decide what foods (of the ones you offer) they want to eat, and how much. Don’t try to coax them to eat more or finish up what you’ve set out for them. Letting the baby decide creates the foundation for self-regulated eating that can prevent later overweight and obesity.

And what about breastfeeding?
Keep it going! Usually for the first few months, parents will make a point of breastfeeding before offering solid foods. The goal is to add solids, not replace breastfeeding. Over time, the other foods become a more significant part of the diet. Remember, though, that breastfeeding for an older baby is about more than just food. Your baby will likely want to keep nursing for comfort, to fall asleep, to feel better when sick, and to connect after separation. That’s all good.