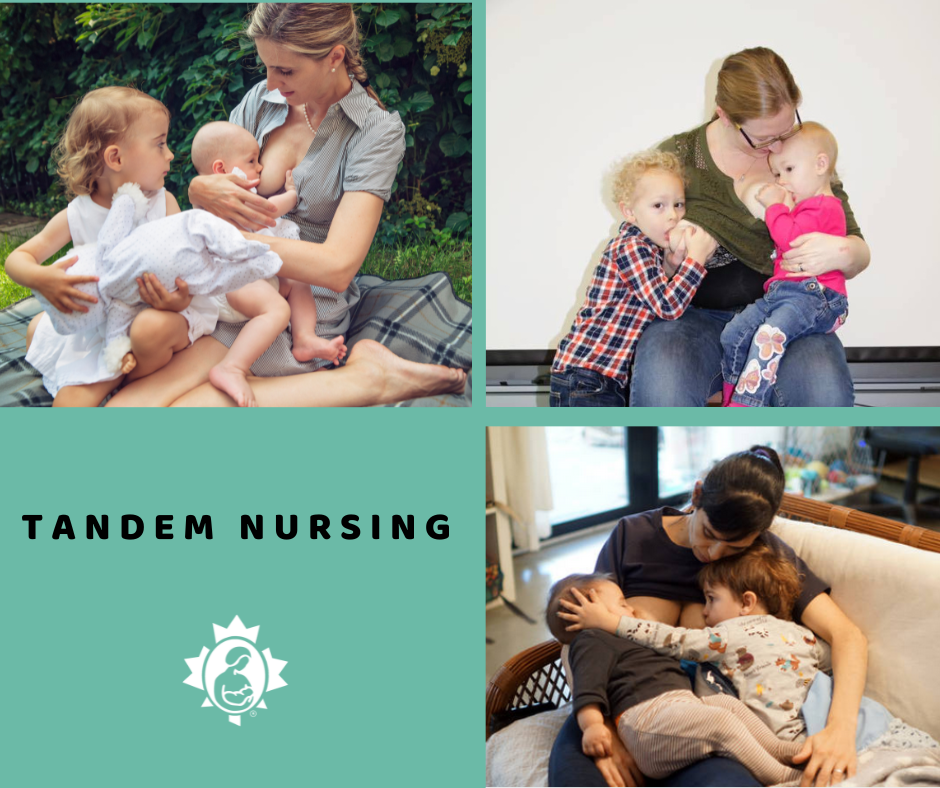 "Wow, it is hard to believe that my baby turned three years old the other day!! What is even harder to believe is that I am still tandem nursing after three years! I am currently nursing Jordan who will be five in July and Joshua who was three in April. I often think of our tandem nursing journey, which began over three years ago, and how it has changed over time. At first I was so glad to still be nursing Jordan, as his brother had trouble latching on right away. Instead of using a pump to stimulate my milk supply, I was able to nurse Jordan who was surprised and excited by the new milk, and who enjoyed the comfort from Mommy in the midst of such a big change to our family. It then became a challenge because I wanted to make sure that Joshua was fed first and Jordan also started to want more than his usual two nursing sessions each day. I also felt that my days seemed to just be about nursing the boys!! Anyway, we found our rhythm and I am glad we persevered as the boys are really close to each other. I am sure the shared nursing had something to do with it!

If asked for advice about tandem nursing, I think back to things I would do differently and say, try to relax, don’t be so rigid with your older nursling. If they need more nursing sessions than usual,then try and fit them in as they are usually just short “checking in with you” sessions. I would also recommend figuring out how to nurse them both at the same time, something I didn’t start until about a year into my adventure in tandem nursing. I am now pregnant with our third child, due in October. My plan is to just go with the flow and see what happens with my two boys and their new sibling. I can’t at this time imagine nursing three children but, then again, I never imagined nursing Jordan past a year or tandem nursing Jordan and Joshua."
Jody, Calgary, Alberta

"I went to my first La Leche League meeting because I was pregnant with my second child and my son Maxwell was still nursing several times a day at 13 months. I was given lots of encouragement, and went home with the book Mothering Your Nursing Toddler. Instead of reducing the number of feeds, Max seemed to nurse more as I increased in size. I remember taking the bus home when I was nearly nine months pregnant and nursing Max, who was about 22 months old at the time.

When I went into the hospital to have Saxon, I had never left Max, so we weren’t sure how he would react. I managed to nurse him just before going in in the morning and was lucky to have a fairly easy delivery. Saxon was born at Grace Hospital in Vancouver and everyone was very supportive. It helped that I had my own room, and when Saxon was about three hours old Max came to meet his little brother and nurse. I was home within another 24 hours and we continued to tandem nurse until Max was five and Saxon was three years old.

When Saxon was three months old, we moved from Vancouver to Hong Kong. We thought we would be gone for two years, but ended up staying for 11. Within the first few weeks, I contacted La Leche League-Hong Kong and it became a major part of my life. I tandem nursed in every market, boat, tram, train, and subway. It wasn’t always smooth sailing but for me it was just easier. Sometimes my husband would arrive home, and I would be sitting up with a boy at each breast and nearly asleep with exhaustion.

In the summer I discovered I was pregnant, and decided that I would wean both boys together. Looking back I can’t believe I did what I did, but I left them for three days with my mother-in-law while my husband and I had our first holiday without the children. When I came back I made sure everyone else put both children to bed as I had been reducing nursing sessions to nighttime only.

My daughter Xanthe was born about four months later. Like the boys, she nursed well and a lot! Her sister Xayla was born two and a half years later. It was great having Xanthe come into the hospital and nurse. I never had any engorgement with Xayla and the nurses in Hong Kong were amazed that I could nurse two children of different ages.

Like Maxwell, Xanthe, although older, sometimes demanded “meme’s” more often, and I can’t deny feelings of resentment because of it. Finally, when Xanthe was four and a half years old, I decided I would like to experience nursing Xayla on her own! We were in Vancouver for the summer and I took Xayla with me to the La Leche League International Conference in Chicago. I was gone for five days. When I returned I found it quite hard not to offer Xanthe the breast but instead found rocking her and looking at the stars (a rare sight in Hong Kong) at night kept her happy. After that I had several more happy years of nursing. Xayla nursed until she turned six last year! I am proud of my tandem nursing and feel I gave both my children and myself many years of contentment and nourishment. Although it can be daunting, I would recommend tandem nursing to any mother considering it."
Judi, BC