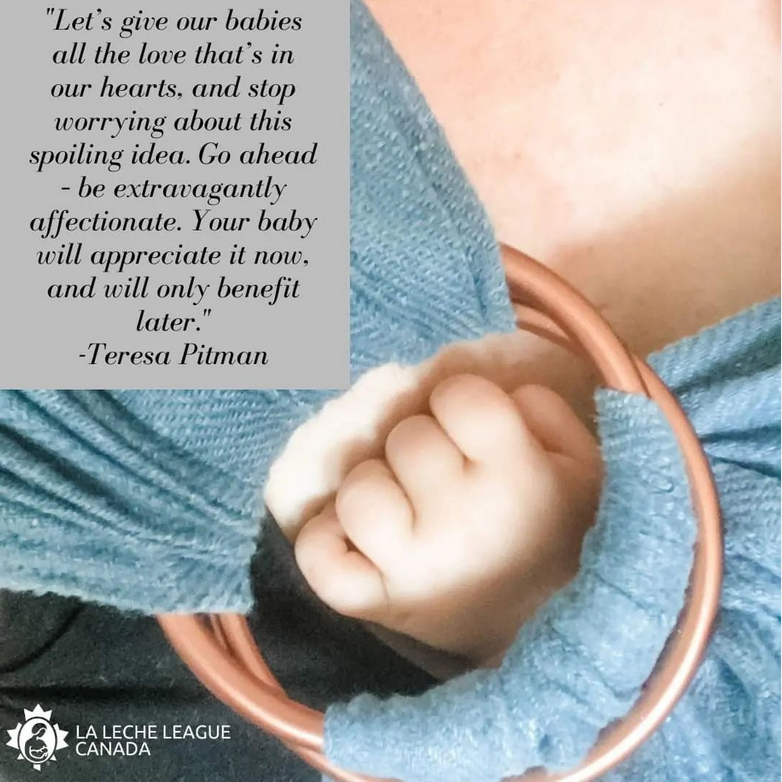 When my children were babies, they spent most of their time in my arms (or in a wrap or carrier that kept them close to me). That’s where they liked to be, and I liked keeping them happy.

But I got lots of criticism. People told me I was spoiling them, that it wasn’t good for babies to be held and cuddled so much, that babies needed to be left to cry. It was at my LLLC Group meeting that I got support to follow my heart, though, and I kept right on carrying my babies.

A study was published that followed up on some earlier research. Those conducting the earlier research had observed mothers interacting with their eight-month-old babies. The majority (84.9%) were described as “warm” and normally affectionate. Another 8.9% were classified as “occasionally negative” towards their babies. Then there was the 1.5% described as “extravagantly affectionate.”

Now, remember, this initial study was done some 35 years ago, when warnings about spoiling were pretty rampant. I definitely would have been classified as extravagantly affectionate.

Joanna Maselko and her fellow researchers at Duke University tracked down these babies, now around 34 years old, and have them do a series of psychological tests to see if the affection they received from their mothers made a difference.

Maselko is quoted in a Globe and Mail article as saying “The takeaway for mothers is that they should follow ‘the more the better’ rule when it comes to doting on their children.” Her research suggests that “maybe you can’t be too affectionate.”

I agree. Let’s give our babies all the love that’s in our hearts, and stop worrying about this spoiling idea. Go ahead – be extravagantly affectionate. Your baby will appreciate it now, and will only benefit later.