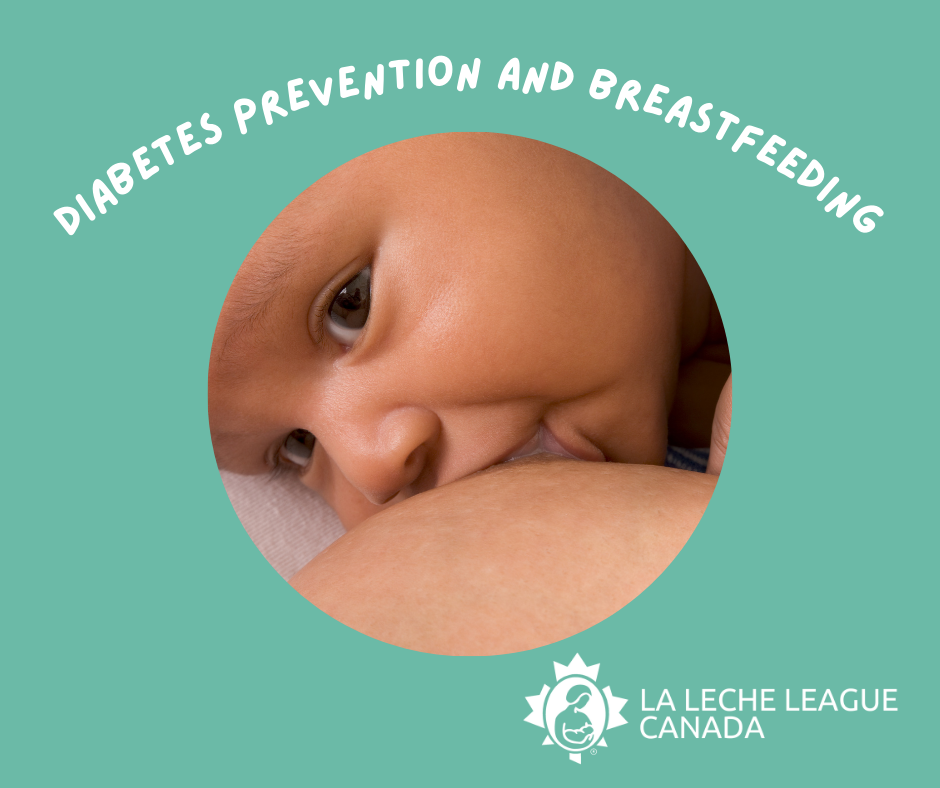 You know breastfeeding provides the nutrition your baby needs. You know that if he wasn’t breastfed he’d have more colds, viruses, infections. But do you know that by breastfeeding you are helping to ward off diseases that could affect him for the rest of his life?

Let’s look at just one of these: diabetes. As you probably know, there are two types of diabetes – Type 1 and Type 2. Both are serious illnesses with possible life-threatening complications, and both are on the increase in North America. In Type 1 diabetes, the body stops producing insulin; in Type 2, insulin is still produced but the body’s cells resist letting that insulin transport sugars as it should.

What you might not know is that breastfeeding can help reduce the risk of developing both types of diseases for the baby, and of developing Type 2 diabetes for the mother as well. Here’s what the research says: A 2008 study comparing children who developed Type 1 diabetes with children who did not reported that “up to one half of the diabetes cases could be attributed to modifiable factors.” In other words, about half the cases could have been prevented. The most important factor, according to the researchers? You probably guessed it: breastfeeding. The longer the baby was breastfed, the less likely he or she was to develop Type 1 diabetes, and the older the baby was when formula or cow’s milk was introduced, the lower the risk as well. Exclusive breastfeeding for six months, with continued breastfeeding as solids are added to the baby’s diet would provide the most protection.

Another factor identified by researchers is that babies who experience viral infections during the first year are more likely to develop Type 1 diabetes. Those who experience more infections are at greater risk. Breastfeeding, of course, helps to protect babies against infections and so strikes another blow against diabetes.

Not only that, but mothers who breastfeed are less likely to be obese. While it doesn’t feel like exercise to us while we’re doing it (well, unless we have a fussy baby and we’re walking around and nursing!) the calories burned up as our breasts manufacture milk are significant. A 2008 study from Georgia (USA) compared mothers who were breastfeeding exclusively to those who were giving their babies formula as well as breastfeeding. The exclusively breastfeeding mothers consumed more calories but lost significantly more weight during the first three months after their babies were born.

In another study from Denmark, also done in 2008, all the mothers started out breastfeeding. Those who weaned their babies earlier were more likely to hold onto their postpartum weight and to gain weight during the first 18 months after their babies were born. Those who breastfed exclusively had a better chance of losing the weight gained during pregnancy by the time the baby was six months old.

So breastfeeding provides many layers of protection from this serious illness – as well as from other obesity-related diseases. That doesn’t mean, of course, that the risk becomes zero. I have two friends whose children developed Type 1 diabetes; both children were breastfed for more than a year. And as they deal with insulin pumps and doctor visits, they’d be the first to tell you: breastfeed. Do what you can to reduce the risk. Every time you put your baby to your breast, you’re giving him an amazing gift.