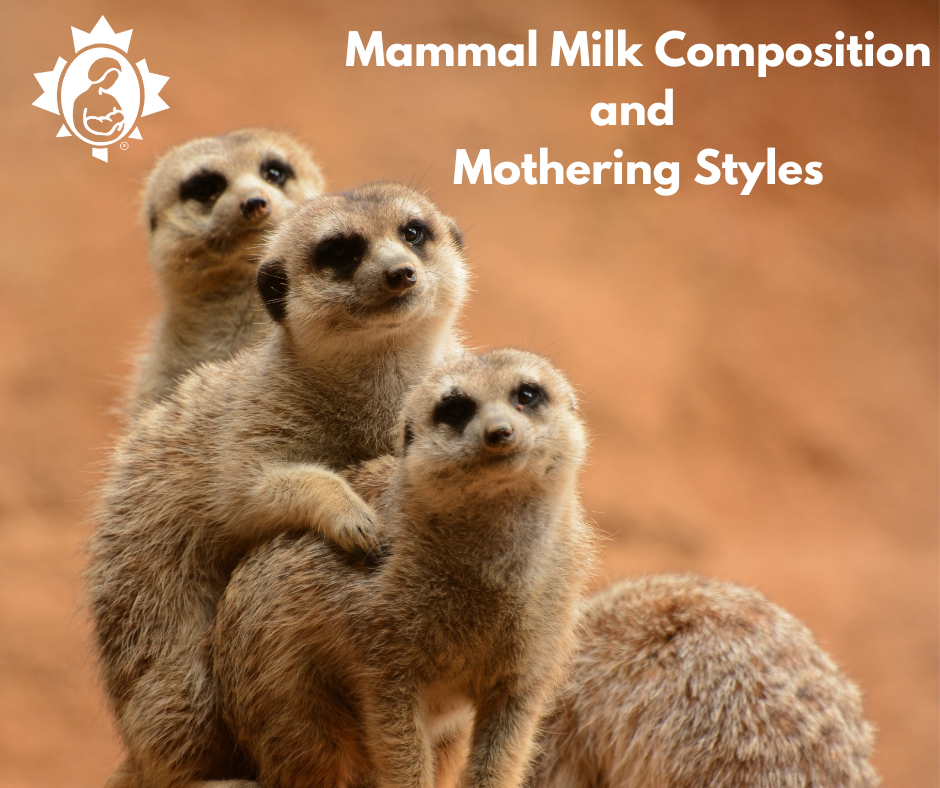 The fat and protein composition of the milk of various mammals is quite different depending on the needs of the species. Mammals who produce the highest fat content milk need their babies to grow a thick coat of blubber very quickly to protect them from the cold. Gray Seals have 59.8% fat and Blue Whales have 40.9% fat in their milk. Human milk has 3.8% fat. Mammals whose milk has the highest protein content have young whose growth is very rapid and who will reach maturity very quickly. Mice have 12.9% protein compared to humans at 0.9%.

The fat and protein content also influences, or has been influenced by, the way the animal relates to its young. Nils Bergman, a public health physician and Kangaroo Mother Care researcher, describes four distinct types of mammals and how their milk composition relates to the relationship between mother and baby.

Cache mammals: The young are quite mature at birth. The mothers hide the babies in a safe place and return to feed them approximately every 12 hours. The milk of cache mammals is high in protein and fat because it has to keep the baby full and quiet for a long time. If the baby cried out in hunger, it would become more vulnerable to predators. Deer and rabbits are examples of cache mammals.

Nest mammals: The babies of nest mammals are less mature at birth. They are generally born in litters. They need the warmth of the nest location and the other young in their early days. The mothers of nest mammals return to the nest to feed every two to four hours. The milk of these mammals is lower in protein and fat than that of cache mammals. Dogs and cats are examples of nest mammals.

Follow mammals: The young of this group are also mature at birth and can walk well enough to follow their mothers within a very short time after being born. The babies stay close to their mothers and feed frequently throughout the day and night. The milk of these mammals is lower in fat and protein than that of cache or nest mammals. Cows and giraffes are examples of follow mammals.

Carry mammals: This group includes the apes as well as marsupials, such as the kangaroo. Carry mammals are the most immature at birth. They are carried constantly by the mother for an extended period of time and they are fed low protein/low fat milk frequently around the clock.

Humans are “carry” mammals. Human milk is amongst the lowest in both fat and protein levels of all mammals. This reminds us that human babies are genetically programmed to be fed often and carried a lot.